An 86-year-old vet isn’t expected to trudge this far. But this is Omaha Beach! A D-day landing beach! I’ll follow our guide wherever she goes.

We stopped at a 22-foot bronze statue called, The Spirit of American Youth Rising From The Waves. It depicts a nude youth rising from the waves of Normandy with arms outstretched towards the sky. At its base, in bold, bronze letters:

MINE EYES HAVE SEEN THE GLORY OF THE COMING OF THE LORD.

A short walk brought us to the Omaha Beach Cemetery. Emerging from an emerald-green velvet carpet, were thousands of white, marble crosses. Scattered among them were white marble Stars of David.

Our guide distributed a red rose of remembrance to each of us. It was to rest against a gravestone of our choice. Upon approaching a Star of David, an eerie silence plugged my ears as I rested my rose upon the gravestone of a 19-year-old. Did I imagine the eerie silence, or was it really the silence radiating from the “spirit of American youth” lying under the 9,387 marble markers? Heroes who never knew the gift they had bestowed upon the free world.

I looked at that red rose. It evolved into a red bouquet, a red bouquet that President Ronald Reagan had placed at the Bitburg cemetery in Germany honoring the monstrous Nazi waffen SS.

The president, in his callous ignorance replied to the dissenters,

“They (the SS) were victims, just as the victims in the concentration camps,”

Had he had known it, the American youth below these gravestones would have thought that they had given their lives in vain.

Elie Weisel, a Holocaust survivor pleaded with the president,

“I implore you to do something else. That place is not your place, Mr. President. Your place is with their victims.” It fell upon deaf ears.

Our group then assembled at the foot of the bronze memorial dedicated to the spirit of American youth that passed away on the Normandy beaches.

The guide asked for any veteran in our group to step forward. About twelve veterans replied. He gave an emotional speech about the sacrifice men make when asked to serve their country. Tears welled up in my eyes recalling the Korean vets in my platoon who did not return. The Star Spangled Banner was aired from speakers surrounding us. Then we went to Omaha Beach.

The beach before us was about a quarter-of-mile wide. Unlike most beaches, it was as flat as a slab of sheetrock, passionless, completely oblivious to its history. I pictured the GIs leaving their Higgins boats and stepping on to this flat beach, helpless, to be mowed down by German machine gunners hidden in concrete bunkers.

Children were chasing after one another, leaving their tiny footprints in the sand. Parents were stretched out under multi-colored beach umbrellas. Tour buses were searching for a parking space. A woman was selling woven baskets. A peaceful panorama sitting upon a beach once soaked with blood.

A motorboat heading towards the shore had me recall this story my sergeant, a WWII vet told me.

“We were cramped up in a Higgins boat heading towards Omaha Beach when we heard machine gun bullets ricocheting off the front ramp. It sounded like a snare drum. When we reached shore, and the ramp went down, seven men in front of me slumped over, dead.” 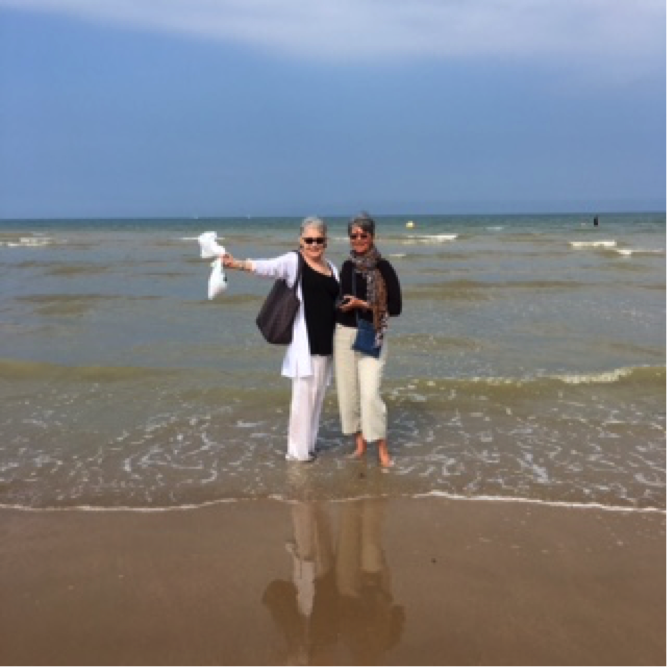 With their shoes on, my wife and her friend, Sandy waded knee-deep along the shoreline to baptize themselves with the holy water of Omaha Beach. We stopped for a while to gather memorial sand and then returned to our bus. 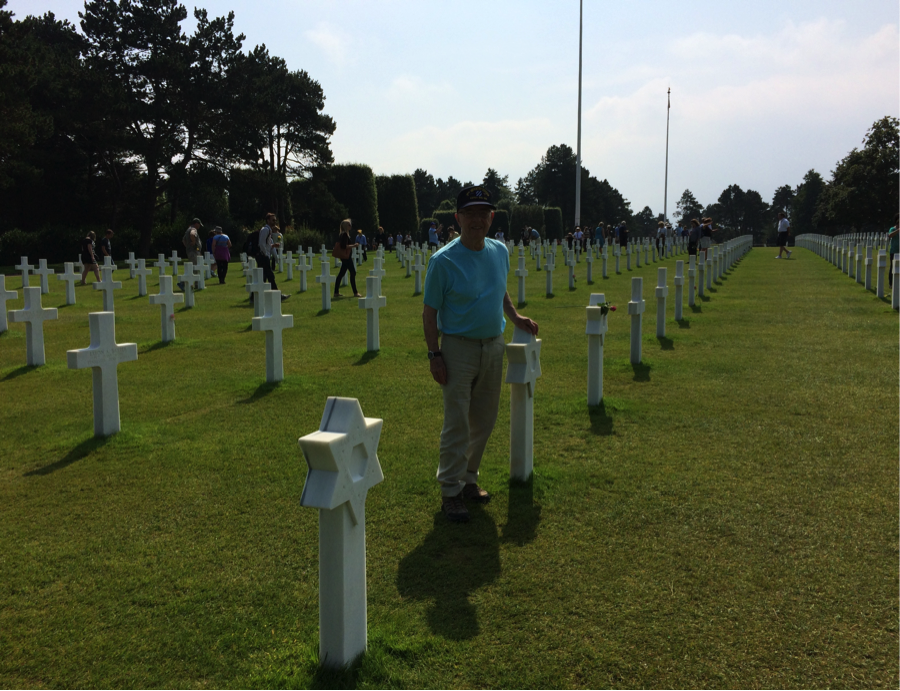