Laundry in the 1940s
Alas Mom. I could still picture you stooped over the bathtub, kneading our clothes against the corrugated metal washboard while its shaky legs swayed to the rhythm of your stroke. Then rinsing the clothes for our family and the free-loading border, my uncle. I could imagine the awful graphic impressions the floor’s mini-marble tiles left on your bended knees. Of course, the operation didn’t end with the rinse. What about the whites? The whites got their special treatment. The bathtub was refilled, and then two little bags of bluing were dissolved in it. The whites became whiter than white. Finally, you placed all the wash in a wooden basket, and then carried it to the rear window of our apartment where our clothesline hung and waiting for a new batch of wet, washed clothing. When all the wash was hung, the whites, fluttered wildly in the wind, as if they were superior to the others.

Who was The Lineman that climbed up that tall, knotty pole to replace worn clotheslines? He appeared as if he stepped out of the cornfields of the show, Oklahoma! He made his way through the backyards of our tenements with clothesline rope spiraled around his shoulder. He was a tall, lean, thirtyish man, handsome and apparently of Anglo or Nordic stack, not familiar in our neighborhood. A freshly washed pale-blue denim shirt, dungarees, and a navy-blue knit hat complemented his rugged persona.

His signature call was, “Line!, Line.!” A tenant’s frazzled clothesline and the shout of her apartment number brought him up the steps and to her door. He opened her window then connected her old rope to his new line then guided it through the far pulley connected to the pole. When it

returned to the pulley connected to the window jamb, he fastened the rope. The knot resembled a hangman’s noose. All this for five dollars. No haggling.
At the end of World War II the launderette came upon the scene. The Lineman marched off with the other entrepreneurs who slowly vanished from the parade that passed by my ground floor window. Upon discharge from the army, I was given 200 dollars. Mom was still bending over the bathtub, on her knees, doing the family wash.

This will never do. With the 200 dollars in my pocket, I went to Master’s discount store and bought a Norge washing machine as recommended by Consumer Reports.
I came home from college few days later. Two men coming down the steps were struggling with a large cardboard box with Norge emblazoned on it. Norge raised my antenna.

“Is this for Apartment 11?”
“It was, but the lady said to bring it back. She doesn’t want it and she didn’t need it.”
I gave them two dollars and told them to return it to Apartment 11.
No sooner did the apartment door close behind me than my mother dropped the knife she was paring potatoes and subjected me to a back- room precint grilling.
“Did I ask for a washing machine? Do I need a washing machine? I’m a society lady all of a sudden. You have nothing to do with your money?” “Ma, I can’t stand watching you do the wash. I paid for this and it’s not going back.”

She was left speechless. The washing machine remained. It was hooked up to our water supply. Meanwhile, the shaky old washboard remained under the tub waiting to be drafted for small skirmishes or washing machine malfunctions.

The photo below indicates the typical clothesline in the East Bronx and the poles that supported the lines. 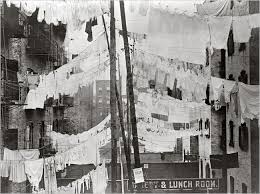