A Shadow Blankets the Bronx

Nineteen-thirty-seven was not a hopeful year, but we didn’t know it. Seven-year-olds weren’t expected to know it. Neighbors shared two-cent papers, hot water visited us occasionally, and heat rose from the basement when Mom’s hammer blasting blows onto our radiator roused the janitor from his alcoholic stupor.

In the Bronx, unemployed fathers met in Crotona Park to extol the virtues of socialism. It appealed to workingmen in the garment industry who considered themselves fortunate to be employed five months a year.

By utilizing rolled up newspapers, broomsticks, milk boxes, tin cans, rubber balls, the facades and stoops of our tenement buildings, competitive games occupied us for hours.

The ground rules were being settled for a punchball game between two neighborhood rivals, the Minford Place Marauders and the Seabury Place Pawnees. To avoid the inevitable argument, we gathered in a cluster around a sewer lid in the middle of the street.

“If you catch the ball off the car without a bounce, you’re out, and don’t try to punch the ball when you’re halfway to first base. You have to punch it at the sewer-lid, which is home plate, and then run to first base. That’s how the big guys play it.”

“If the ball goes in Schmidt’s cellar, you’re out and you have to …”

A burst of silence erupted as we stood with our mouths agape. The bright, sunny sky was eclipsed by the sinister appearance of this huge, oval object. It became the focus of our attention, an unexpected intruder on an ongoing neighborhood rivalry. We were stunned. The clear, sunlit afternoon vanished. Seabury Place was blanketed by a giant dark shadow. The airship hovered above us like a marionette suspended by strings. Why wasn’t it speeding like the airplanes that pass every day?

“Wha’…? What is that thing?” cried Arty as he moved closer to Donny.

“I don’t like this. Let’s get out’a here,” shouted Bernie.

We saw the Hindenburg in newsreels and in newspapers, but who expected it to hang over Seabury Place? On its rudder, a twisted black swastika in a white circular field, encased in a red square assured us it was the Hindenburg.

Why was it flying at such a low altitude? Could it have come all the way from Germany? If there was a swastika on its rudder, were there Nazis inside? What will they do to us after they land? Where was it going to land?

The punchball game had lost its moment. Without a word, the Marauders gathered and quietly returned to the security of their turf, Minford Place. We retired to our headquarters, our meeting place, our dugout for ball games; a parked car’s running board. For security, we squeezed more closely to one another than usual. Shoulders pressed against shoulders, knees coupled with knees. Arty, shaking with fright sputtered,

Bernie, who was just as anxious as Arty, put on an air of bravado,

With that, Bernie said he was going upstairs to ask his mother if she knew anything about the Hindenburg.

“How would she know?” asked Donny. “You don’t buy a newspaper.”

“I don’t buy one either,” I replied. “Mr. Suslow gives it to my father after he’s through with it.”

The running board session was adjourned. Rapidly beating hearts and wobbly legs stumbled for home. I opened the door to my apartment. Ma was filling a chicken-neck-skin to make heldzel (stuffed derma).

“Ma, did you see the scary zeppelin that flew over Seabury Place this afternoon?”

“How can I see anything when our kitchen window shows me Mrs. Koletsky’s kitchen? Wait until Pa comes home.”

Pa soon dragged himself into our apartment. I ran to tell him about the Hindenburg. He became agitated.

“What? A swastika?” he said. “Nazis? How could it be? The United States doesn’t want those bastards here.”

Pa was well aware of the German threat throughout Europe. A large part of our family was living in a tiny village in Lithuania. He was about to turn on the radio when my uncle came home from work. He had been a freeloading boarder, laundry included since he attended my parent’s wedding.

“Izzy, did you see the Hindenburg today?” asked Pa.

“What Hindenburg? Wasn’t he a German general? What was he doing here in the Bronx?”

“Yes,” Pa said sarcastically. “Are you in good shape? He came here to draft you for the German army.”

At 8:00 PM our family gathered around our small, gothic Emerson table radio to listen to the news. It was Thursday, May 6, 1937. An excited newscaster reported that the Hindenburg drifted slowly over New York City heading for Lakehurst, New Jersey. At 7:45 PM, upon approaching its mooring at Lakehurst it exploded, killing 35 of the 97 people aboard. A member of the ground crew was also killed. Rumors as to the cause of this disaster persist to this day. Indisputable evidence is still lacking.

On September 1, 1939, without the Hindenburg, Germany invaded Poland and World War II was underway. 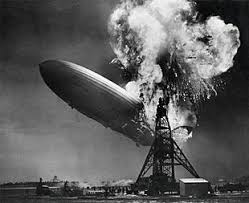 The Hindenburg crashes at Lakehurst, N.J.