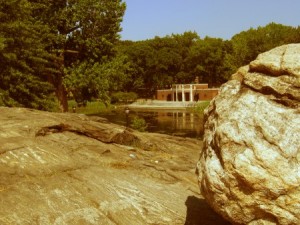 Polished by the forces of erosion, and then delivered by a glacier, The Indian Rock stood sentinel on a hill overlooking Indian Lake. Four smooth, well-worn grooves in the rock provided a grip for my Keds in order to reach its crest. Damn! Why do I play handball? I could see my dirty sock shyly peeking through a hole in the sole of my left sneaker. Davega’s on Southern Boulevard sells handball sneakers. Next time I’ll get them if they’re not too expensive.

Indian Rock was a landmark to the neighboring residents of Crotona Park who rented rowboats in the summer to escape the stifling heat of their tenements. It stood unfazed during the frigid January and February frosts and kept an eye on the rowers and the kids fishing in the summer. During the winter, when the lake was thick enough to support skaters, “Parkee” Solomon, would raise the flag (a red ball on a white field) near the boathouse to indicate that skating was permissible. Whenever that flag was up, homework was benched. I would grab my skates, dash across Boston Road, pass P.S. 61, round the corner at Charlotte Street, pass the playground on my left and run to the Indian Lake in Crotona Park.

In the early 1930s, a ramshackle wooden building at the north end of the lake was used for boat rental in the summer and as a warm-up hut for the skaters in the winter. One evening, a huge fire crackled not far from the building. I joined the skaters gathered around the fire while a young man was singing Home On the Range. I was so impressed with the song that I kept repeating it while skating around the lake. Later I learned that it was President Roosevelt’s favorite song.

This dilapidated building succumbed to a compassionate fire, and then a brick boathouse was built in the 1940s at the east side of the lake. In the men’s room, I could fortunately change into my ice skates. I say fortunately because my woolen socks had more holes in them than a golf course. My mother would patch them with whatever color yarn she had. Joseph had his Technicolor dreamcoat and I had my Technicolor stockings. Of course, this was an embarrassment, so I changed in a stall in the men’s room. Soon I was on the lake, an equal to the best-socked skater on the ice.

If the lake did not freeze, there was a poor substitute. A small, frozen wading pool in the nearby playground. It was no fun trying to slither through the floundering skaters straining to balance themselves by grabbing on to anyone or anything within their grasp.

In 1942, seated on top of the Rock, I felt like a spectator in a loge waiting for the Crotona Park Spectacular to begin. The nasty pretzel man in his white apron opened the show with his salted pretzels stacked on four dowels and many more in his woven wooden basket. As he carried them on a slow lap around the lake, the pretzels bounced in cadence to his arthritic shuffle. His curses at the kids who hassled him were saltier than the pretzels in his basket.

Ah! There’s the black derby with the little old man underneath it. A small, thin, cardboard box with a bag of polly seeds and a bag of pumpkin seeds hung from his arm. “Two cups for a penny,” faintly filtered through his trim white beard as he tottered along the perimeter of the lake.

To my right, in front of the benches, my father and a group of unemployed men were in their usual heated debate concerning the garment workers union. My father, a veteran of employer/employee combat for union recognition, earned his ribbons with oak leaf clusters during the struggle. Sometimes their humorous recollections about their life in the shtetl cooled off the quarrel.

There’s a teenager in a rowboat! Where did he get the fifteen cents to rent it? With the oars in the boat, and using his shirt as a pillow, he stretched out over three seats as the waves gently rocked him to sleep. Near the boathouse kids were digging for worms to use as bait for the “sunnies” swimming in the lake.

In the summer, the jewel in Crotona Park’s crown was the 300-foot outdoor swimming pool. The summer heat sent hundreds to the pool. The morning session was free. There was a small charge in the afternoon. We were given a wire metal basket, placed our clothes in it, given an elastic band with a metal number, ran past the showers, and off we went into the clear, aqua-green, chlorinated pool. The smaller diving pool had five diving boards. At its center was the 15-foot high diving board. There were two five-foot boards at each side of the high board and two two-foot boards beside them. I wouldn’t call the fifteen-foot high board a diving board because I never dove off it. Whenever I felt fearless, I climbed up the ladder, ran over the board, held my nose, and leapt feet-first into the pool. A long, molded cement arch with about four or five tall steps faced the diving boards gave the bathers an opportunity to sit and watch the divers, or sun themselves. Above these steps was a food concession stand. This was not for me. I always brought my own cream cheese on a bialy and rinsed it down with water from a fountain.

One day I found a dime on the steps. The bialy was to find its way home, because I was going to buy a delicious smelling, sizzling hot dog and a soda for ten cents. What a treat! The session was over. I showered, and then dressed. The bialy was in my pocket, and I was on my way home. When I reached my apartment I was feeling queasy. I ran to the bathroom. While perched on the toilet seat, Ma found the bialy and cream cheese sandwich in the refrigerator. I climbed off the throne, and then vomited into the sink. Without knocking, Ma rushed in and asked me why I hadn’t eaten the bialy. I told her I found a dime and bought a hot dog and soda. While I was heaving, she preached, “Sure. You’re vomiting! You don’t feel good! You see what you get when you eat trayf!?” Trayf (non-kosher food) stayed out of my throat for many years thereafter, but Crotona Park has remained with me to this day.

In 1938, Indian Lake was drained in order to search for Peter Levine who was kidnapped while coming home from school in New Rochelle, NY. Partially drained, two wooden doors came floating to its shallow surface. My friend Ronny and I stepped into the muck and tried to use them as a raft, but they returned to the bottom as soon as we lay upon them. On a sloppy walk home, my soaking brown corduroy knickers and knee-high socks clung to me as if a thief was going to snatch them. My muddy, dark brown Keds smelling like sewage, were squirting bubbles with every step. How do I explain this to Ma?

The drainage of the Lake yielded nothing but garbage soaking at its muddy bottom. but The Indian Rock knew if anything had happened. If only they would have asked, it would have told them their search was in vain.